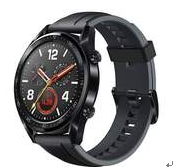 Would you buy this?

There are days where it feels like Huawei is the tech brand for those who live for the drama. There are also days where it feels like the Chinese company could well end up becoming the next Samsung. Although the climate is looking increasingly-tenuous for Huawei’s enterprise and B2B telecommunications business, their consumer division continues to be hard at work. And if you’re going to be the next Samsung, logic says you need your own smartwatch.

The Huawei Watch GT isn’t the company’s first effort at cracking the space but it is, in many ways, their most interesting. At least on paper. In practice, the Huawei Watch GT is a little bit boring. It ticks most of the boxes and it sets a new benchmark for battery life but it doesn’t feel as impressive or exciting as it ought to.

If you’re a person who lives and dies by the numbers, you might well find what you’re looking for in the Watch GT. However, beyond the battery life, there’s little to love here.

Read more TPG kills the rollout of its mobile network

Availability: This Huawei Watch GT is included as a free bonus if you buy a Huawei Mate 20 Pro between the 24th of January and the 28th of February.

Right out of the gate, the fact that you aren’t really paying anything for the Huawei Watch GT is a big point in its favor. The Huawei Mate 20 Pro is far from cheap but it is the best smartphone you can buy right now - and the inclusion of a free smartwatch doesn’t hurt its appeal.

The fact that that smartwatch has one of the best battery performance in the category doesn’t hurt either. The Apple Watch usually lasts two or so days on a full charge. The Galaxy Watch and Fitbit Ionic push things to about four or five days. The Huawei Watch GT is quoted at a whopping fourteen days of usage per charge. What’s more, based on my time with the watch, that number might actually be underselling it.

My first week of regular use only saw me burn through about 40% of its total charge. When it does run out, the Huawei Watch GT only takes about two hours to charge back up again. Where recharging other smartwatches is a disruption, recharging the GT feels like a pit stop. In the past, battery life has often been an Achilles heels that’s threatened to topple even the best smartwatches out there. Here, it feels like a near-solved problem.

The Huawei Watch GT delivered on that idea that, even if it doesn’t last forever, there comes a point where you have so much battery life that you don’t really ever think about it running out - and that peace of mind that comes with that is the GT’s strongest asset.

How did Huawei achieve this? Well, rather than opt for Google’s WearOS platform, they’ve gone and built a their own software solution: Lite OS. Lite OS allows the Huawei Watch GT to have a similar level of functionality.

The Watch GT supports notifications, step-tracking, heart-rate monitoring, specialised fitness tracking (indoor & outdoor runs, climbs, indoor & outdoor cycling and swimming), sleep tracking and alarms. It even has a built-in compass. Unfortunately, there’s no way to build on that functionality with any sort of third-party apps and no contactless payments to speak of.

These omissions are only the start of the Watch GT’s shortcomings.

What’s not so good about the Huawei Watch GT?

There are days where I’d definitely think of myself as a numbers guy and, on those days, Huawei’s strategy of playing up the numbers really speaks to me. I see rumors that Huawei’s P30 Pro will feature 10x optical zoom and I get hyped. I see that the new Huawei Watch GT has fourteen days of battery life and I’m into it. Numbers are clear, clean and usually a good representation of why and how one product might be better than another.

However, looking beyond the numbers, the Huawei Watch GT is a painfully plain product to behold. If you’re the kind of person who prefers their smartwatch to look like a watch, you’ll probably see something in it that I don’t. However, to me, the design is bulky and boring. It's not uncomfortable to wear but it's not all that comfortable either.

The screen is large and colorful enough but a little susceptible to glare. The selection of watchfaces is stock-standard at best and the two dials that hang off the right side of the frame aren’t really used for enough to justify their inclusion beyond contributing to the broader ‘it-looks-like-a-normal-watch’ aesthetic.

And the list of things that aren’t here is more than long enough to justify pressing pause. There’s no NFC, so no contactless payments. There’s not really any on-board smart assistant utility. There’s no maps, music streaming or Uber support. And all this is before we apply even the usual bag of caveats that come with the idea of buying a smartwatch full stop.

If you own a Samsung phone, there’s probably enough reasons to stick with the company’s own smartwatch hardware over this. If you own an iPhone, the experience of actually Watch GT doesn’t hold a candle to the sharp and intuitive interactions you get out of the Apple Watch - even if the battery life does last a whole lot longer. The Huawei Watch GT ticks a fair amount of the boxes but, tit for tat, it falls short against the competition on everything but battery life.

You can’t. But, jokes aside, that does put the Huawei Watch GT in a really interesting position.

If it was priced at the usual $350+ and sold separately, I don’t really know who I would recommend this to beyond those who prefer to keep their gadgets in the same family and those who dig the more traditional look. As it stands, it’s a free bonus - and free bonuses are always nice.

It’s just a shame that, beyond the battery life, the design and execution here is Huawei Watch GT is so mediocre and by-the-numbers. If Huawei really wants to put their engineering muscle behind the smartwatch category, I’m all for it. But they also need to bring with them some creative thinking. Success in the smartwatch space isn’t just about matching or beating the numbers brought to bear by the competition.

The Huawei Watch GT has a unique hook but, beyond that, it feels more like an afterthought than a must-have in its own right.

Read more How to get Google Assistant on your Samsung smartwatch